The concert at Annes Hus

The concert yesterday was a wonderful experience. Anne made such a good atmosphere with food, wine, people connecting, and she showed them around in her supercosy hotel. People showed a lot of appreciation for both this and the music, so whe are happy and grateful for all this.

Here is the last song (before an extra) in the concert: Man in the Moon. Before the song I am saying this (and it just appeared to me before the concert; that this was what it was all about): We are all looking for something outside ourselves, an idol, a God, a man... somebody to make us feel safe and protected. As when we where children. But now we are grown ups, and where do we find it then? (answer: at the moon;) )

Enjoy! We did, playing there. Such a nice evening, such nice audience.

We also want to thank Thomas Fridner for filming and recording the concert. You can also watch the video directly from our Facebookpage.

After the concert and after having had a long talk with Anne, her partner Ingmar and my friend Sara, we slept over in one of Annes great rooms, had some champagne, giggling and talking until we fell asleep.

The next morning, on our way home with our things. 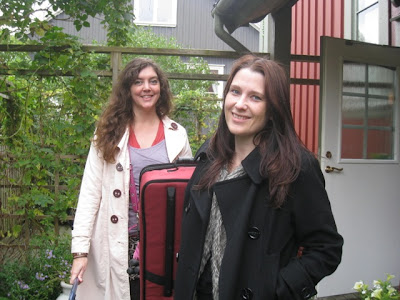 Now, I dont know what the next step is. Have to give it some time. Chao for now, and keep an open heart!
Upplagd av Camilla Bakke kl. 22:14