Camilla Bakke on piano, lead and songwriting. She has been playing the keys in both biker clubs and churches, directing choirs, giving pianolessons, but mostly doing a lot of other things (studying languages, travelling, having children, etc.), before starting this project. 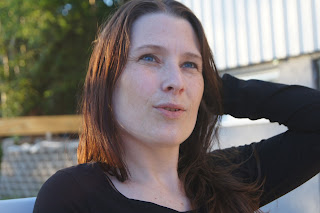 Diana Andrén Scarpati on viola and vocals. Original member and co-starter of the band. Diana has played classical symphonic music, and in several bands, now with: The New String Theory, Alpaca Sports, Roman Andrén. She has been recording albums with all of these bands. 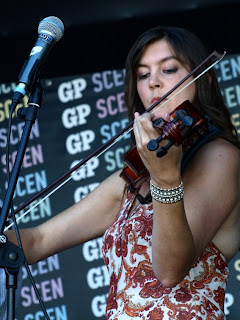 
Guitarrist Stefan Petersson works as a music teacher, and has played in different bands and constellations, but now mostly Simone Says. He likes irish music, plays the accordion and has even toured Scandinavia as a drummer once upon a time... 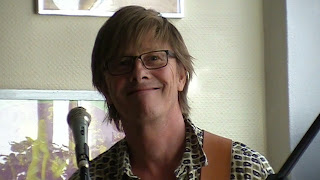 Cezary Dubicki plays electric and acoustic bas. He has been studying music in Poland (Musical School and Musical Acadamy in Gdansk), and played in plenty of different constellations: jazz, folk, classic, pop and rock. Parallel with the music studies he took the degree of engeneer (specialisation in acoustics). Since he started in the band he has built up a well equipped home recording studio and studied music production. Now he is coproducing our album, as well as recording others. 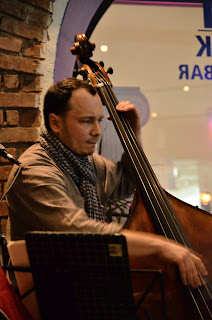 Drummer and percuissionst Anders Johansson has a music degree at Musikhögskolan in Gothenburg, and have been playing jazz, pop, funk, soul, classical and brazilian music. He works as a drum teacher and freelance musician. 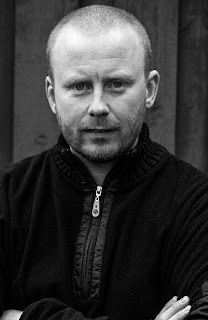 In 2010 Camilla and Diana started working together on the songs Camilla had written during maternity leave: It started with a simple arrangment of Evolution, for piano and viola. This was recorded in collaboration with songwriter and artist Martin Eisenberg, and released it on Myspace in June 2010. In fall Camilla and Diana started to rehearse with Martin Aakervik on bas, and Claes Svensson on drums.   This period they performed at open stages had their first gigs. 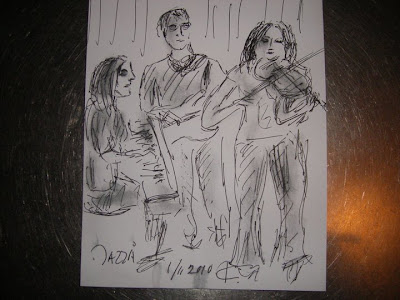 A drawing from playing at Jazzå open stage. Camilla, Martin and Diana.

In the beguining of 2011 Martin moved to Norway, and Roland Nyman started playing the bas. On guitar, Stefan Petersson joined the band in May 2011. Claes decided to quit, he also played in another band and didn´t have the time for both. For a time Stefan also stepped in playing the drums on some gigs and recordings.

In august 2011 the band had their first concert at the pub "Mitt andra hem".  They also recorded some songs with economic and practical support of ABF, and released them at the web. During spring 2012 they collaborated with the drummer and producer Staffan Lahti, who also was playing with them on their performance on the GPscen finals in August 2012. GPscen is a music competition for bands all over the country, arranged by the paper Göteborgsposten. The song "I´m running" came to the finals as number two on the pre-webvoting, and they got some media attention and radio plays of this. 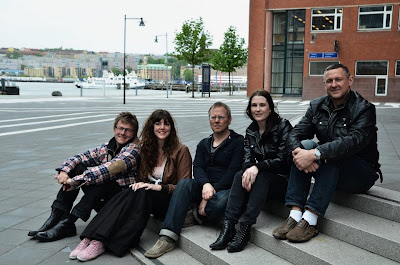 After GPscen there was a quiet period, and some shifts in members: Staffan started to work out of town and Roland had a lot to do, so they quit the band, and in January 2013 Cezary Dubicki joined the band on bas/contrabas. He quickly became a engaged member of the band as he also had interrest and knowledge in music production.

During spring 2013 they did most of their recording for their debut album; partly in Nacksving Studios and partly in Cezarys home studio. For the recordings they had a temporary collaboration with the drummer Martin Folkelind. In august 2013 the drummer Anders (Johansson) joined the band.