We had such nice two weeks in Spain, me and Didi. We were sharing a nice big flat close to the sea. The course was great (I can recommend it to other spanish teachers, here is the link to it), eating, talking, and just hanging out a lot. Just having fun. Here is from a stroll one nigt. 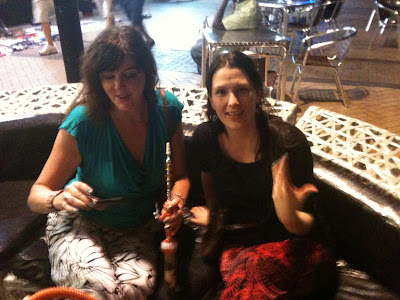 We were also playing! Didi was bringing her viola "just in case", and it turned out we lived just next door to this super cosy jazz club, "Yello Submarine". We went there several nights to listen to their bands, and also went onstage playing on one wedenesday jam session night.

Simone Says at jam session at the jazzclub "Yello submarine", Fuengirola, Spain, the 20th of june 2012.

It was a nice club and welcoming atmosphere. We played three songs (Transiton, Label, I´m running), and this was the first. A nice challenge and experience, playing just the two of us. I especially liked when some young girls passed by us later, one yelling "very good, me gusta la cancion "estoy corriendo"! Now we have had some requests at playing duo, and we will work on that concept as well. Though I must say that I missed the band while playing.

Well, now we´re home, it´s raining, and I am cleaning my closets, just enjoying being at home not having plans at all. I am also writing on new songs, I try to work a bit every day when the children are asleep. I want to be in a creative process. Soon I am going for a week to my hometown Selje, with my family. Looking forward to it. And then we start rehearsing again before GP scen, looking forward for that too :)
Upplagd av Camilla Bakke kl. 21:13