Now the album is being mixed

On Sunday we finally sent all files for mixing!! Me and Cezary have been working really hard lately, and also the band, having a gig the same week and all... And our families, all a bit exhausted. And it feels like a big burden has been lifted off my shoulders. Finally I leave this to somebody else! Then we have to think about printing, artwork and a dussins of other things. But now I will have some days off being with my family, my children has not seen their mother much lately. I so hope it will turn out fine after the mixing and mastering. And we have to fix a release party with our friends, because we deserve it! Soon five years has passed since I made a decicion on writing songs, and soon four after me and Diana started, later Stefan and one year ago Cezary, who has done so much for this record. And I hope people will feel it and get it.

Here is a picture from our nice gig at Tuve library. It was really great to see/listen to SEVEN, and a priviledge to play afterwards. 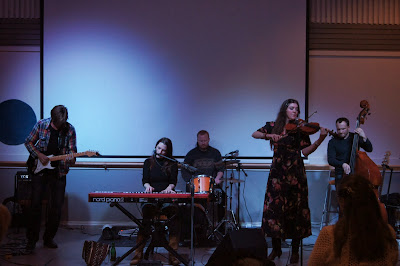